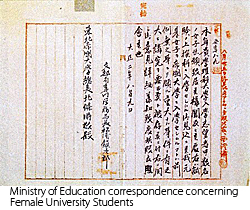 Tohoku University was the first university in Japan to admit female university students. During the late period of the Meiji Era at the inception of Tohoku University, universities were limited to only male graduates from the old high school system and it was unthinkable for women to gain admission as bona fide university students. However, an incident occurred during the second year of the Taisho Era (1913) to break this precedent. The newly founded Tohoku Imperial University placed four women applicants at the entrance examinations at its own discretion. In the midst of entrance examinations, the Ministry of Education sent a letter to the university stating, “As there are no precedents for women to enter the Imperial University, this is a serious incident that must be discussed thoroughly” and demanded an explanation through official channels. However, the university paying no heed to the matter announced the acceptance of Chika Kuroda, Raku Makita, and Ume Tange, thus creating the first female university students.

The three female university students graduated as the first female baccalaureates before long and spent several years in research and studies as junior assistants and graduate students. Afterwards, Kuroda served on the faculty of her alma mater Tokyo Woman’s Higher Normal School, presently Ochanomizu University, and later continued her studies aboard at Oxford University. Upon her return, she served as a non-tenured part-time researcher under her mentor Rikoh Majima at Riken and produced many achievements researching safflower pigments. In the 4th year of the Showa Era (1929), she became the second woman to be awarded a Doctor of Science degree in Japan. In recognition of her achievements, Tohoku University established the Chika Kuroda Prize in the 11th year of the Heisei Era (1999) as a prize to recognize outstanding achievements for students in the Graduate School of Science.

Completing graduate school, Tange studied in the United States. After her studies abroad, she returned to her alma mater Japan Women’s University as a professor while working at Riken under Umetaro Suzuki to research vitamins and later received a doctorate in agriculture.

Makita, like Kuroda, returned to her alma mater Tokyo Women’s Higher Normal School to serve on the faculty. However, upon her marriage to Heizo Kanayama, a Western-style painting artist, Makita resigned her position and supported the reclusive artist for the rest of her life.

Although women entered the Tohoku Imperial University in 2nd year of the Taisho Era (1913), excluding a hiatus of nine years following 11th year of the Taisho Era (1922), two women entered the science department in mathematics courses as auditors. The acceptance of women as bona fide students continued in the following years uninterrupted. With the increase in the number of female students, a student organization called Shinrankai was founded during the early years of the Showa Era.

At this time, with the exception of Tokyo Imperial University and Kyoto Imperial University, the entrance of women as students came to be accepted at imperial and private universities, but Tohoku Imperial University continued to be the school with the highest women enrollment within the imperial university system. In the pursuit of academic achievements, women were attracted to law, liberal arts, and science departments and gathered in Sendai, the city of learning. These graduates continue to play active roles in research and education, contributing to culture and society.

During the War, although the number of female university students increased, the mobilization of the country for the war robbed the students of their pursuit of an education. With the termination of the war, the women came back to the university in force as if to make up for lost time and played important and positive roles in the reconstruction efforts in the postwar period.

In the immediate postwar mandated modification of the educational system, prewar higher schools and the Imperial University system with male-oriented higher university entrance examinations were abolished, and the acceptance of women to universities became widely accepted. Tohoku University, with the advent of the new university system in the 24th year of Showa Era (1949), 41 female students enrolled at the university. Women entered fields such as medicine and engineering with increasing numbers which was not seen in the prewar period.

In the history of more than half century, the enrollment of female students has increased steadily. From the latter part of the 1980s, the speed of the increase has accelerated. Presently, approximately 4,000 undergraduate and graduate students are enrolled. Although small in number, the female faculty numbers are gradually increasing as well. 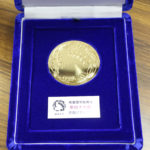 Every year, the Aoba Society for the Promotion of Science, which is mainly composed of alumni of the Faculty of Science, honours a select few of female graduates with a prize who have produced outstanding achievements during their scientific doctoral studies. This prize is awarded to female students selected from the whole doctoral cohort across the Graduate School of Science and the Graduate School of Life Science at Tohoku University. This prize was founded in 1999 to encourage female researchers in their scientific endeavors and careers, and 45 female students have been awarded over the last 15 years.

Graduate School of Science and faculty of Science , Tohoku University